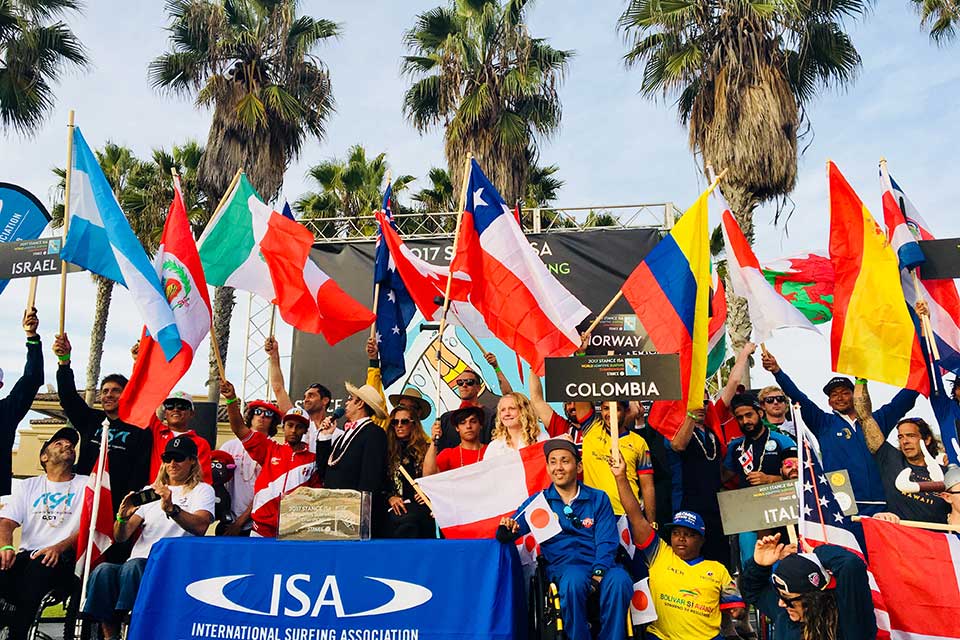 Now it was time, from the 29.11.17 to the 03.12.2017, the competition ISA Adaptive Surfing Championship took place in the quiet village La Jolla/California. The World Cup is sponsored by Vissla, a well-known brand in the surfer scene, and the city of San Diego. More than 25 nations and more than 100 participants with different handicaps expected this great sporting event.

Co-Founder and president of Stance John Wilson talk to the delegation “On behalf of the world stance family, we thank you for participating in this world Cup. This is the third time we can participate, and I am pleased to announce that we will be the sponsor of the title for the year 2018.”

“Our Goal is to celebrate human individuality and I can’t imagine a better group like those I see in front of me. We are very proud to participate in this event.”

Through the colorful sea of flags the opening ceremony became a special event. In the run-up to this, ISA wanted every nation to bring sand from its country and then put it on stage in a large jar. This symbolic gesture is meant for diversity and for a peaceful competition. The beach shook, and a positive mixture of joy, excitement and adventure lay in the air. No matter whether participants or spectators, everyone is happy to be part of this event. Even for the inhabitants, the spectacle was a welcome and varied experience. The helpfulness of the volunteers and spectators was enormous and unique. Naturally, a healthy harmony was created for each other. Although, the conditions in La Jolla Beach were very tough, such as strong and varied currents, many seaweed, exclaimed waves and the game of tides and flow, but the strong-willed athletes mastered this challenge. Brazil, Hawaii, Australia and America won the most medals for themselves.

Competition with the Obstacles, not really!

« It was amazing to see the growth of adaptive surfing during the last few years, and the ISA management provides to lead this sport to the Paralympic Games 2024, which is the place where we belong ». 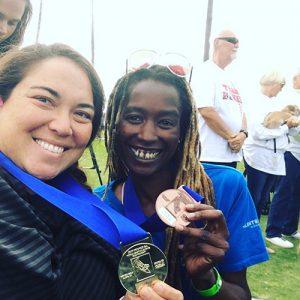 For each Participant, it was a special honour to represent his country and to have a history written at the same time.

The decision to form a women’s team can also be seen in the figurative sense for the autonomy and strength of women.

Unfortunately, far too many women in the world are still victims of discrimination and put under the shadow of Man. The female adaptive surfers stand for independence, awareness of goals, courage and strength. Properties that will come out of this important decision even more, since the pressure to compare with the men falls. Some female participants participated in the competition for the first time, so the excitement was particularly great. This year’s participation of athletes increased compared to 2016 to double.  The ISA hopes to host an even higher number of participants next year. 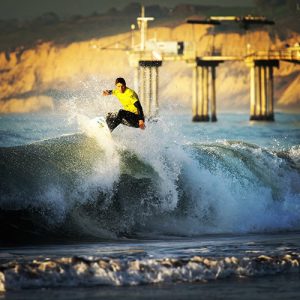 Adaptive surfing means adaptable wave riding. The Adaptive World Championship of ISA stance is a very inspiring and humane surfing event for participants and visitors. Participants with different handicaps and illnesses are divided into different classes. The following divisions are listed, standing, lengthening (with and without assistance), kneeling, seated (Wave-ski) And not forgetting the blind and classification, which on the third day of the competition were able to reach the highest scores and thus take the show. The surf boards of the athletes are adapted to the special needs of the individual, i.e. the boards can be modified under stricter conditions. A jury evaluates the 25-minutes heat, the style and the number of waves.

The registration of the Para-surfing at the Games of 2024 is planned, but many countries have not prepared early enough. The Paralympic Committee therefore made the decision to allow these countries to prepare for the games of 2028. The request made to the IPC has not been in favor of this due for various reasons:

Mark “Mono” Stewart who has often won the gold medal for Australia, said “The waves are getting bigger and bigger out there, Wow! I take part for the third time here and have never seen waves as beautiful as the La Jolla Shore. Adaptive surfing has become a global phenomenon over the last three years. This gives many young people the opportunity to go into the water. Being a pioneer in this sport is a great feeling for me. It is good to know that we are here at the beginning of something special. The first stones to create a platform for future generations who have the potential to surf in the Paralympic Games are posed.” He also added that “the ISA World surfing adaptive Championship changed my life, as well as that of most athletes who were there from day one. The whole adaptive surfing community assembles and then becomes a big family.”

Challenged Athletes Foundation (CAF) is a nonprofit organization based in the Jolla. The CAF has the mission for supporting handicap persons, national and international, to continue and realize their athletic goals.

“It is the mission of the Challenged Athletes Foundation (CAF) to provide opportunities and support to people with physical challenges, so they can pursue active lifestyles through physical fitness and competitive athletics. The Challenged Athletes Foundation believes that involvement in sports at any level increases self-esteem, encourages independence and enhances quality of life.” https://www.challengedathletes.org/mission-and-history/

The foundation has sponsored most of the surfers involved in the event and is also committed to promoting the younger generation. One day to participate in the Paralympic Games is every athlete’s dream. 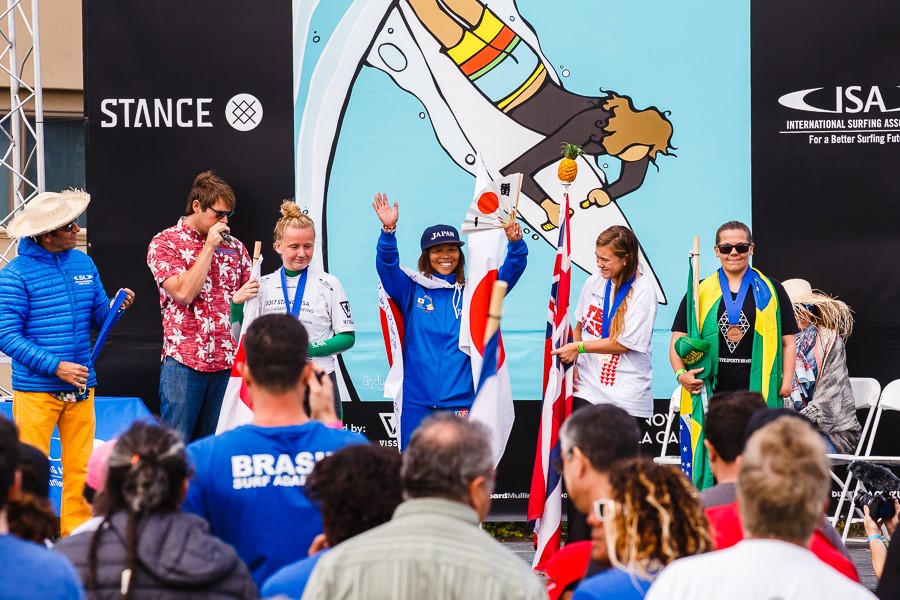 “It is the mission of the Challenged Athletes Foundation (CAF) to provide opportunities and support to people with physical challenges, so they can pursue active lifestyles through physical fitness and competitive athletics. The Challenged Athletes Foundation believes that involvement in sports at any level increases self-esteem, encourages independence and enhances quality of life.” https://www.challengedathletes.org/mission-and-history/

The foundation has sponsored most of the surfers involved in the event and is also committed to promoting the younger generation. One day to participate in the Paralympic Games is every athlete’s dream.

This year France was able to win a silver medal. Germany was represented for the first time with two athletes and the female participant was able to reach fourth place and received the copper medal. Very touching was the Japanese athlet who broke into tears during her gold medal award.

The movement is also continuing in Europe

Even in Europe, adaptive surfing has prevailed. For all those who want to discover surfing, there is in France the organization “the Association Nationale Handi Surf”, which in addition to surfing offers other courses for people with disabilities, such as canoe Hawaiian (a type Canoeing in Hawaii), Bodyboard, Stand Up Paddle And of course surfing. As the interest in surfing continues to increase, the sports club works closely with other organizations throughout the year to organize events and competitions.

The Association Nationale Handi Surf is a member organization of the French Federation of Surf. The Handi-surf Association focuses on the training of people with disabilities in the field of water sports and has developed a special training program for trainers who want to learn to deal with physically and mentally handicapped people. Thanks to the additional sale of the brand “Handi-surf” to surf clubs and through donations, the training center tries to finance itself, but it’s not easy. They need much more money from the French government to fully accomplish their goal.

In France, some clubs are in co-operation with the organization and can therefore offer a barrier-free access to the sea. There is also the possibility to surf on trips in Europe, a good address is the surf school www.lehena.com and there are many more in Europe. The work of the Association Nationale Handi Surf is really unique in Europe.

Jean-Marc Saint Geours, the team leader of Handi-Surf, is very close to the heart of this mission, and he puts everything in place so that people with a restriction are no longer marginalized. He always says, “When people with disabilities take surfing lessons, surfers learn a lesson for life.”  With this principle, he wants to integrate Handi-Surf in Europe and sport is the easiest form of integration. With this guiding principle, he wants to develop Handi-surfing in Europe.  For him, Sport is the easiest form of integration.

Surfing means exceeding the limits and being able to overcome the fears, by self-confidence and calmness, these shacks can be thrown away. An experience that can be transferred to life.